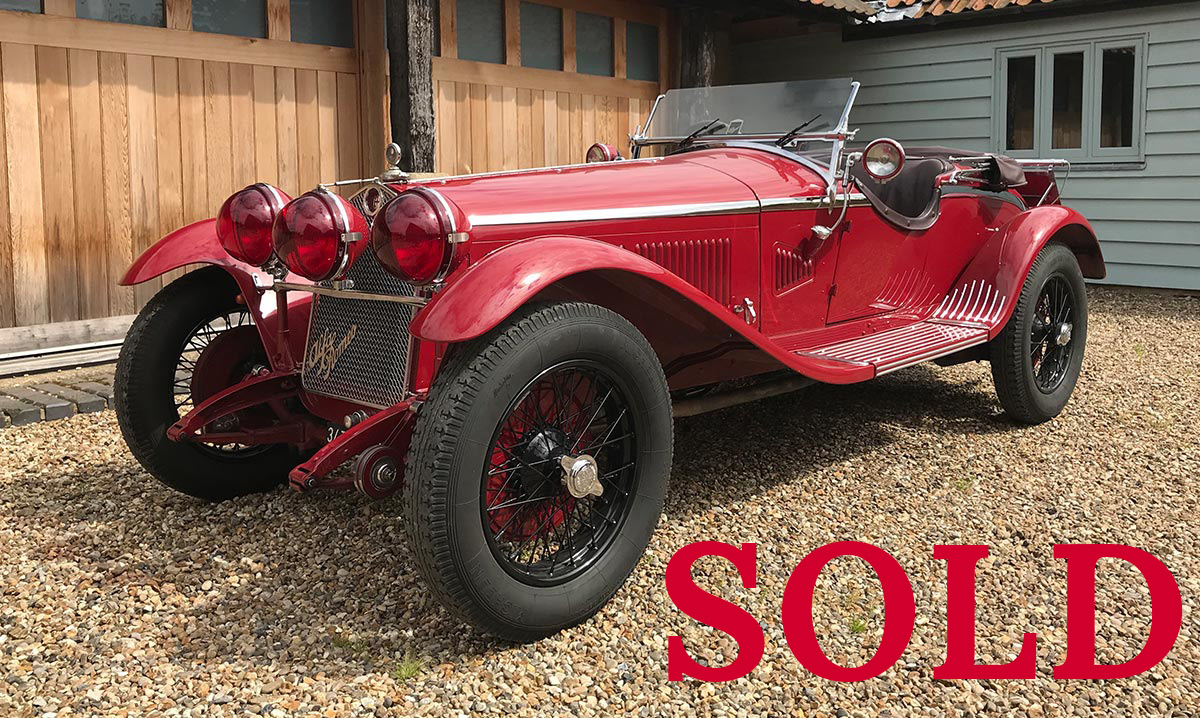 Designed by the legendary Vittorio Jano the Alfa Romeo 6C 1750 Gran Sport evolved from the earlier 1500cc Super Sport and was produced in four more series of gradual improvements over the following six years, soon distinguishing itself as one of Alfa Romeo’s most important models. The penultimate model was the fifth series Gran Sports Spider, launched in 1930, of which only 106 cars were built on the short 108-inch chassis.

These cars were coach built to individual customer order by firms like Zagato, Castagna, and Touring. In factory competition form, the 6C 1750 firmly thrust Alfa Romeo into the winner’s circle, making it arguably more successful than any Alfa model to date. With five major victories in 1929 alone, including Giuseppe Campari’s triumph at the Mille Miglia, the 6C 1750 took the top three places at the 1930 Tourist Trophy and the 1930 Mille Miglia. As such the 6C 1750 Gran Sport Spider has grown to be a darling of top-tier concours d’elegance and a favorite among discerning collectors and Alfa purists.

In a departure from the earlier cars the Gran Sport featured an ingenious sloping radiator that not only gave the car a more rakish appearance but also functionally increased the surface area of the radiator for improved cooling. It was equipped with the Roots supercharger, which developed an unprecedented 85 horsepower, from its 1,752 cc DOHC inline six-cylinder engine with a Memini carburettor, four-speed manual transmission, front and rear live axle suspension with leaf springs, and four-wheel mechanical drum brakes.

All the mechanical components for our car, together with a replacement chassis by a reputable Italian specialist, was purchased by the current vendor over 40 years ago. The project was given to the highly respected Italian restorer Gigi Bonfanti, of Bonfanti Garage, Vicenza, who not only had considerable experience of this model, but also had reference to an original car which belonged to the owners’ closest friend, who is now a world renowned collector.

Gradually over the next twenty years every nut and bolt was restored and the car assembled, and finally clothed in the sweeping lines of a Zagato Gran Sport by coach builder Farina.

Since the car’s completion it has appeared in nearly twenty high profile events, over nearly two decades, winning Best of Show at the Festival de l’Automobile – Mulhouse 2004 Concours d’Elegance des Musees; at the Targa Florio 2016, appearing as one of five cars from the Registo Italiano Alfa Romeo; and most recently as an exhibit at the 2017 Auto d’ Epoca Show at Padova.

However it is has been sparingly used on the road and remains in superb, virtually concours condition. Currently on Italian papers, this is an exceptional car in equally exceptional condition, mechanically and cosmetically.