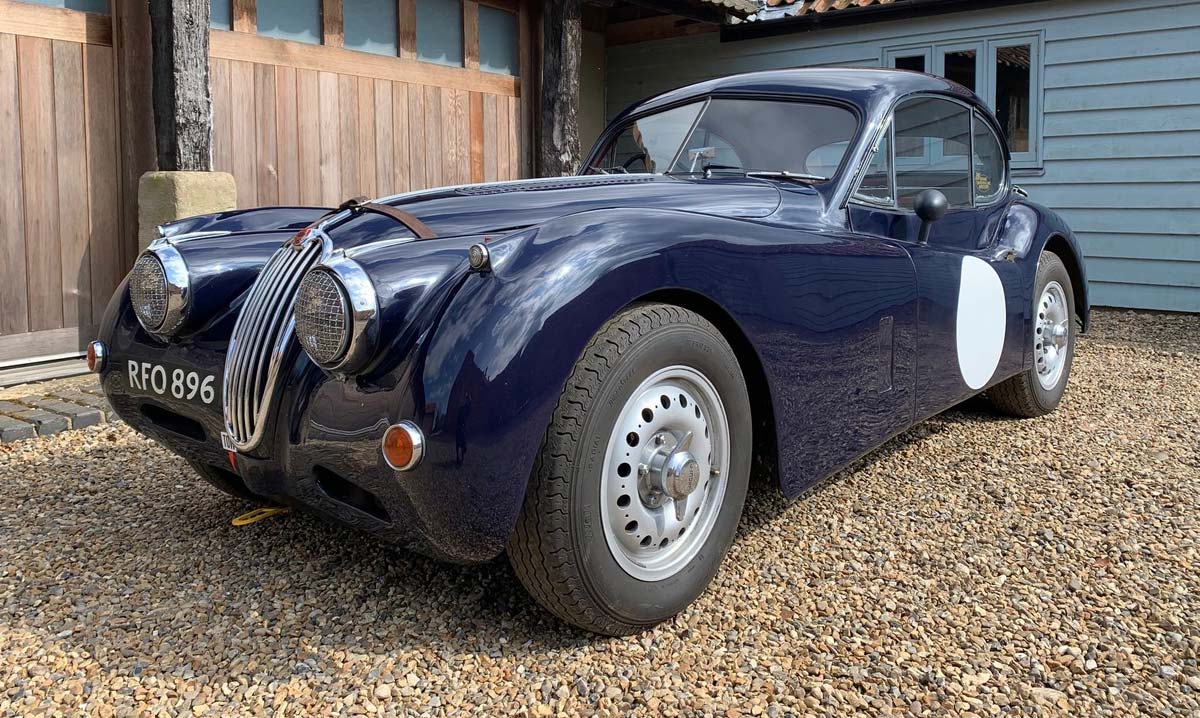 Wearing its bodywork like a favourite old sports jacket, faded in places with patches at the elbows and buttons missing, this delightfully ‘old school’, older restoration XK140 is a wolf in wolves’ clothing. Under the vintage 80s paint, touched up here and there, and bodywork with stress cracks and bubbles, is a triple carburettor 3.8 litre engine, and many other modifications making this ideal for historic rally use. It won’t win any beauty pageants, but in the right hands it might just make a front runner in competitive events.

In short, this is a driver’s car, and was from the day it left the factory on 15th September, 1955. This is a rare home market SE (Special Equipment) model of the XK140 FHC, and one of only 842 RHD Coupes. Special Equipment cars featured C-Type Head; Close Ratio Gearbox; Dual Exhausts; and Wire Wheels. Its rarity has given rise to the story that the first owner was Duncan Hamilton, as Jaguar’s reward for his victories at Le Mans. It is well known that the Factory set aside cars for VIPs and Works drivers, and the fact that the first owner’s name is not recorded on the Jaguar Heritage Certificate has added to the speculation. But sadly there is no proof of this.

However it is well-documented that this XK140 was owned for nearly a decade by the Chairman of the Historic Grand Prix Car Association (HGPCA), Julian Sutton. Prior to this, the car was used for moderate competition in the 1990s and the history file records its participation in a series of Sprints and Hill climbs at The Jaguar Car Club Meeting at Cornbury Park; Bentley Driver’s Club Sprint (in which it competed with a D-type/XKSS/Lister Jaguar and Allard);The Boscombe Sprint; Crystal Palace meeting and Sedlescombe.

During Julian Sutton’s ownership, from 2002-2010, he added to the considerable Competition Mods already carried out by a previous owner, by commissioning respected Jaguar specialist Ian Nuttal of IN Racing to rebuild the triple carburettor 3.8 litre engine. The specification of the car is now as a fast road/race car and is as follows:

The history file contains older invoices for over £35,000, while the current owner has further invested £40,000 rebuilding the car from the inside out, and fitting Dunlop alloy race wheels, but stopping short of doing anything to change its wonderfully patinated appearance.

Not for the faint-hearted…