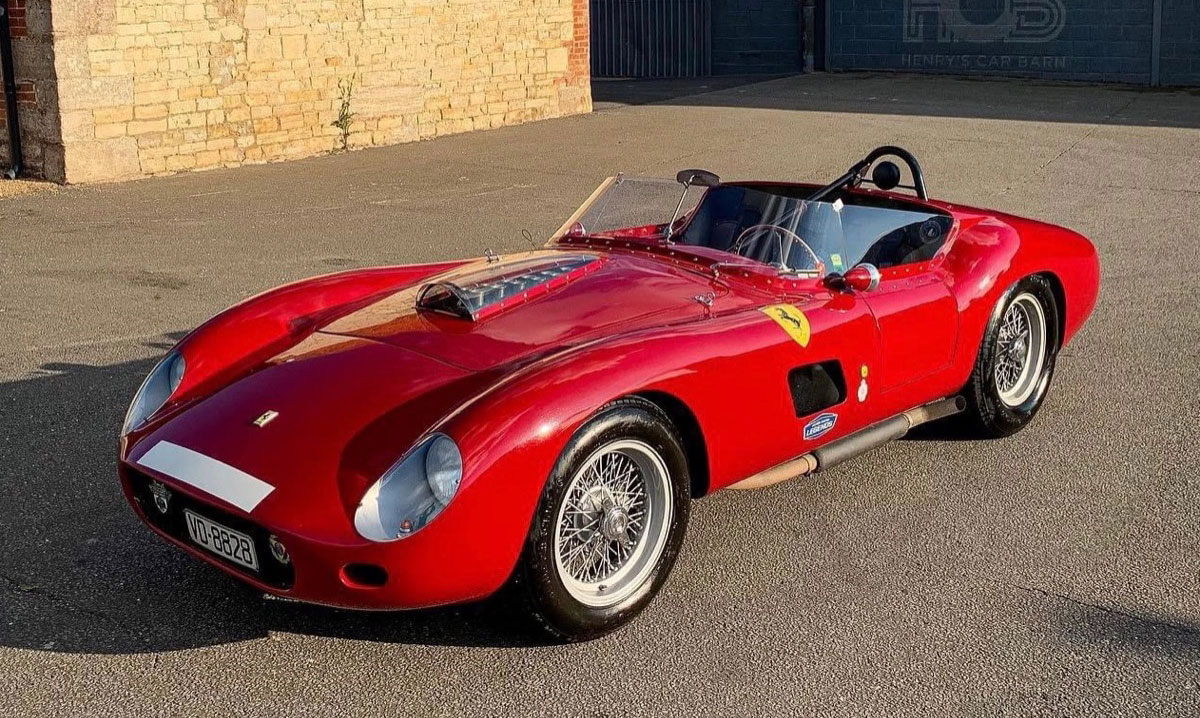 ● Eligible for a wide variety of pre 61 historic events

This one has it all: a unique 250 Testa Rossa with fascinating provenance; Goodwood Revival pedigree; FIA HTP papers; UK road registration; concours win; magazine coverage and a documentary in the wings. Brothers Georges and Claude Gachnang established SCUDERIA CEGGA in 1959 in the town of Aigle, Switzerland. They built 12 racing cars and raced them from 1959 to 1967, their first competing at Le Mans in 1959. The name CEGGA (pronounced Segga) resulted from the compilation of the first letter of: Claude Et Georges Gachnang Aigle.

In 1959 Georges and Claude Gachnang bought the remains of a crashed Ferrari TR250 chassis number 0742 – the Askolin/Monteverdi car. They retained the engine, gearbox and the central section of the tubular chassis, but made radical changes rebuilding the car with independent rear suspension and modified front suspension while upgrading the car as far as they could to TR60 specifications. They then commissioned Scaglietti to build a new body shaped to house the high back end and new suspension.

The CEGGA-Ferrari, with its Scuderia chassis number 002/60, made its debut at the Mauborget Hill Climb where it came 2nd; a remarkable achievement for a radically re-engineered car. It subsequently won its next race and continued to be highly competitive from 1961-1965, racing at high-profile events like Nurburgring, Grand Rix Pescara and Ollon-Villars, with Georges as the main driver supported by fellow Swiss drivers Grob and Cailliet. and brother Claude as the mechanic.

When George retired from racing in 1966 the CEGGA-Ferrari was converted to a road car for everyday use, and the following year was acquired by well-known Ferrari collector Pierre Bardinon. He rebuilt the car back to its original 1958 TR specification of 0742 with Fantuzzi commissioned to build a new pontoon body onto a new and rebuilt chassis.

Background to our CEGGA-Ferrari TR250

This is where the story of the CEGGA-Ferrari could have ended had it not been for a well-known Goodwood racer David Cooke who, fascinated by the back story, approached the now elderly Georges and Claude Gachnang who readily agreed to assist in the reconstruction of 002/60.

The brothers provided drawings, technical information, detailed analysis and specifications to enable him to build a tool room copy of 002/60 around the centre section of a genuine 1958 Ferrari 250 chassis, as per original, and a rebuilt period-correct Ferrari 250 engine.

Once again Cooke entrusted the build to his long-time collaborator Neil Twyman whose previous joint projects included the unique ‘tin-top’ Pontoon-Fendered Testarossa and the Lotus Breadvan, both regular invitees to the Goodwood Revival. The rebuilding of 002/60 started in 2016 with the help of the Gashnang brothers who flew in from Switzerland just to offer hands-on advice and direction, and to ensure the car was period correct in every detail. It is a rare privilege for any restorer to be able to consult the original builder. David had an original Ferrari 250 chassis and it was around this ‘core’ Ferrari 80mm tubular chassis, with all the correct dimensions, that 002/60 would be re-built, replacing the front and rear suspension exactly as the Gachnangs had done with 0742 in period. A completely new rear chassis cage was constructed to house the original ENV differential and inboard disc braking system.

The original independent front suspension with period Koni shocks was fabricated and the rear with TR60 high fixed suspension struts built around the rear differential cage. This was the most difficult part of the rebuild with great attention needed to the geometry and alignment of the all round independant suspension as it was built in period.

An original Ferrari 250 engine with 4 stud cylinder head and an original gearbox were restored and rebuilt. A new wiring loom and original instrumentation was fitted in the correct and original configuration, while the aluminium body was hand-built, rolled and hammered by hand as done by Scaglietti in period, with direct reference to drawings and period photos provided by the Gachnangs. From the outset the car was sanctioned by Scuderia CEGGA, and it was granted it the original chassis number 002/60, this being the second car built, in 1960. As such the car is registered on its V5C as a CEGGA-Ferrari 002/60.

Such was the significance of 002/60 that immediately on its completion, without any time for testing, it was invited to race in the Sussex Trophy at the 2019 Goodwood Revival, where it was reunited with Georges, seen in the accompanying photos riding pillion with the owner, before the race. Its next outing was at the Silverstone Classic running in the Stirling Moss Trophy with Motor Racing Legends. 002/60 finished middle of the field of nearly 60 cars, moving up 12 places from its original grid position. Invited to the Goodwood Revival on several occasions, including the forthcoming 2022 Revival, and to prestige events like 2022 Ollon-Villars, where the original car raced in 1965, 002/60 has FIA HTP papers, Appendix F, both Goodwood and Legends also accept the car in their Pre-61 events, like the Stirling Moss Trophy. The CEGGA-Ferrari also comes with considerable archive photos donated by the Gachnangs, together with all supporting ‘sanction’ paperwork. In January 2020, and still in bare metal, it was the subject of a nine -page editorial feature in Octane Magazine, titled Number Two of One; has been extensively featured in other publications here and overseas and it was also ‘highly commended’ in Octane’s Bespoke Car of the Year. Since then 002/60 has won an award at the Hurlingham Club Concours (formerly the Louis Vuitton Concours), and is soon to appear in a documentary by Walt Adriaensen for Pistons and Wheels. This remarkable car is now available for the first time, and represents a truly unrepeatable opportunity to own a unique piece of automotive history and to participate in some of the most prestigious historic events.