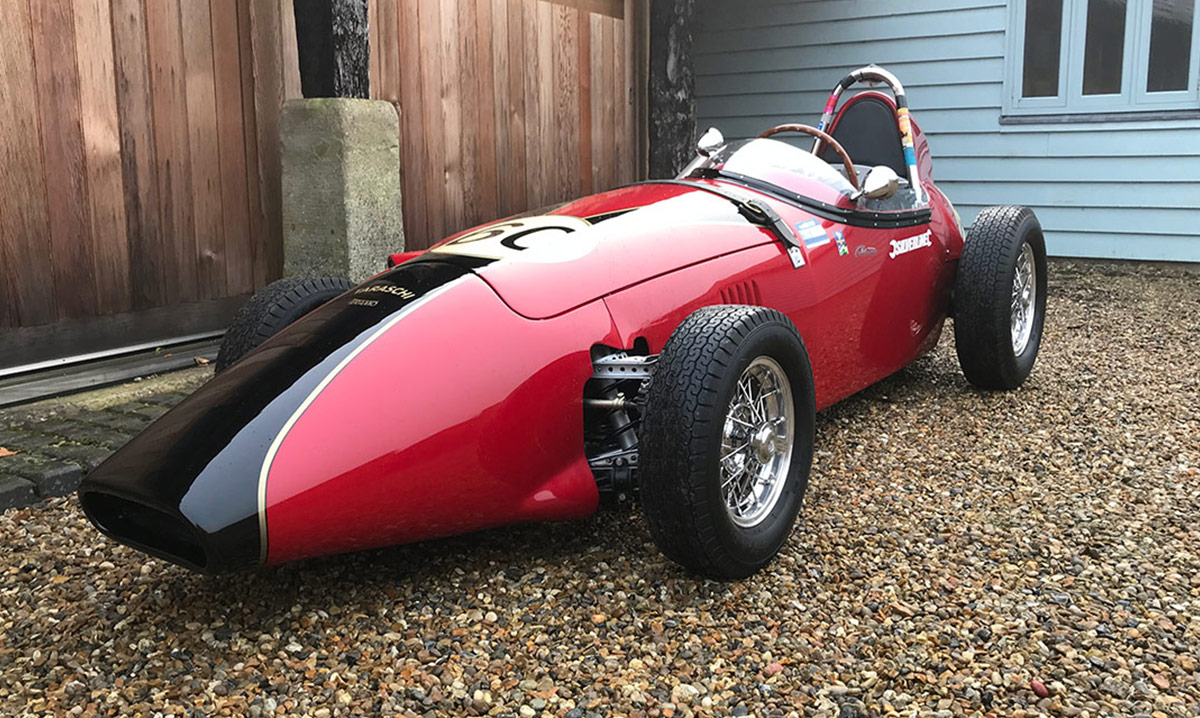 Meccanica Taraschi was founded in 1935 by Italian racing driver Berardo Taraschi, starting out as a builder of competition bikes, but best known for it sports cars and racing cars.

The first race car was debuted with Berardo Taraschi at the wheel on May 11, 1947 at the Piacenza circuit where it finished third in its class class, achieving the fastest lap. it was a modest beginning but a considerable triumph, compared to another Italian newcomer, Ferrari, which on its debut at the same event, did not finish.

Joining forces with the Rome-based Giannini brothers for the supply of engines, Taraschi quickly grew from workshop to factory, located in Teramo, 100 miles north of Rome, building over 50 cars, with a growing reputation for aerodynamic bodywork and success in international race events.

In 1957, Taraschi began producing single-seaters for the new Formula Junior category powered by an extensively modified Fiat 1100/103 engine, mounted on a ladder-style chassis of large diameter tubing, and set at an angle so the driveshaft was offset to the right of the driver. But perhaps most surprising was that  it was the only Formula Junior to feature a de Dion rear axle. The evolution of this model lasted until 1961 with successes and excellent placings, even in the United States, where 13 Taraschi Juniors were exported.

In 1961 the company closed, but in 2020 the marque was revived by Berado’s son Tazio, with the launch of a hybrid supercar, the Taraschi Berardo, named after his father and with a price tag of nearly €1m.

Background to our Taraschi Formula Junior

BT-60 is of the very last cars built, in December 1959, just before the company closed. It featured a Fiat 1100cc (Motore #103-031) with Weber 32DCO3s, and de Dion rear suspension. The striking bodywork was crafted by respected carrozzeria Filacchioni of Rome.

As yet, nothing is known of the car’s early history. It was exported to the United States at some point, but no records exist before 1985 when it belonged to Paul Tavilla in Florida. A decade later the car had moved to the West Coast and underwent a restoration by Dick Buckingham, for owner Bill Cotter who was to race the car at Monterey from 2002-2008. Its Vintage Motorsport Logbook records a number of outings during his ownership.

Purchased by the current owner in 2015, the car has been the subject of considerable expenditure (£30K+), with all the right people, and has undergone perhaps more development than any other Taraschi, at the hands of Iain Rowney of Delta  Motorsport. Dan Setford rebuilt the engine in 2017, which the owner describes as ‘very strong, and the gearbox Was  completely rebuild and drive shafts re-engineered.

In 2017, following the rebuild, the car was raced extensively at Silverstone, Nurburgring, Dijon, Oulton Park, Cadwell, Croft, Brands Hatch and Snetterton, and at circuits in the Czech Republic. It was raced at Kaunus in Lithuania, Riga in Latvia and Karlskoga in Sweden.

This proved pivotal as two years later this Taraschi won its Class in the 2019 Formula Junior Silverline Championship, driven by Ian Rowley; it also achieved one of the fastest laps.

Out of action for the past year due to lockdown, this Taraschi Formula Junior is now ready to be campaigned and represents a wonderful opportunity for the next owner as the events calendar begins to open up once more.