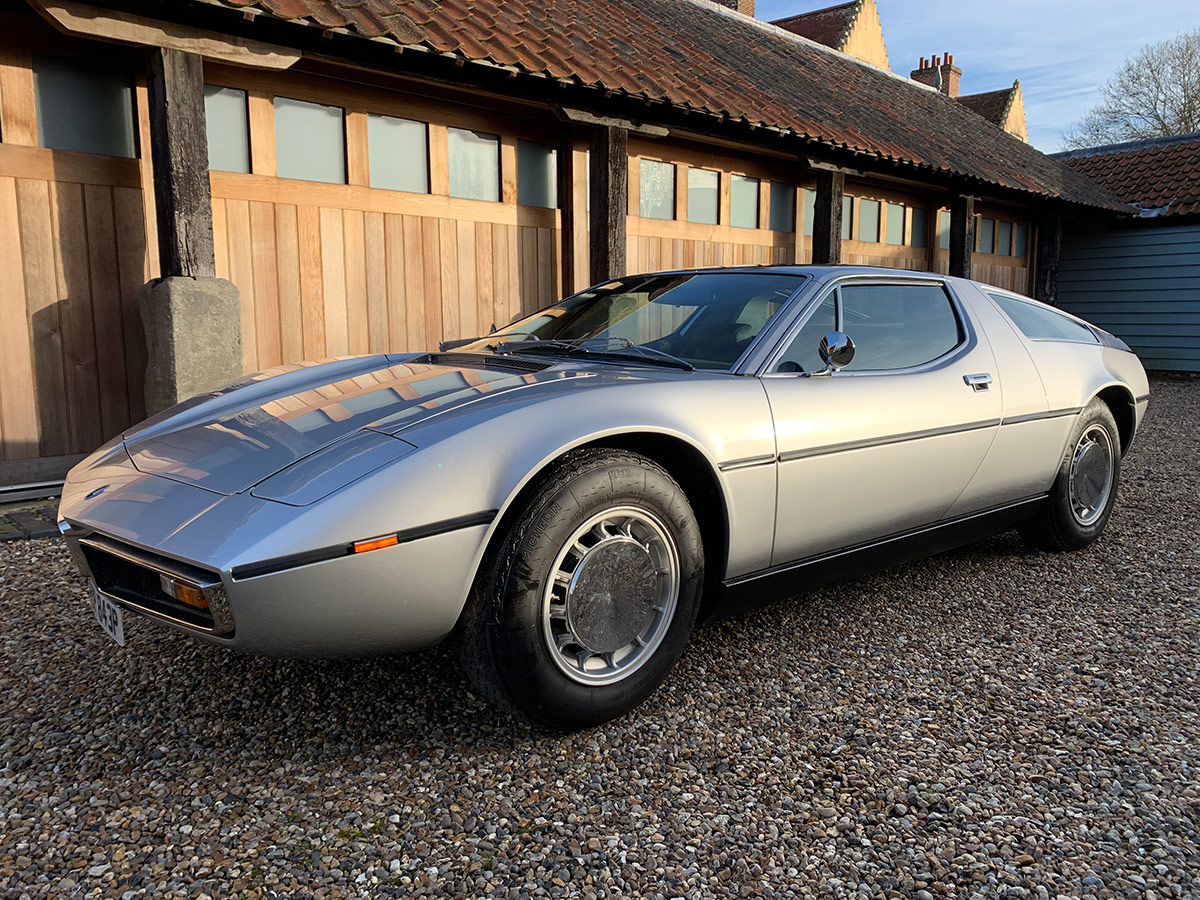 A ‘no expense spared restoration’ Owned by the same family for 50 years this exceptional Maserati Bora was clearly a very treasured member of the family, for it has had over £150,000 lavished on it as part of a three year restoration programme.

The history file is remarkable for the sheer volume of invoices for work done between 2015-2018 by the respected restorers Kent High Performance Cars, formerly known as The Ferrari Centre of Maidstone. What started as a restoration estimated at nearly £50,000 tripled to a final cost of £150,000 to ensure that every tiny detail was addressed. It would take pages to itemise the work, and be easier to say what has not been done to this car, but it would be have difficult to find an example in such superb condition had you walked into the Maserati showroom in Slough back in November 1975 when the car was brand new.

With a full engine and mechanical rebuild; complete body restoration and repaint to its original colour; complete trim in Connolly hides to Maserati Vaumol specification and fully detailed the list goes on. Please call for a full description.

A rare car in its own right, only 42 RHD Maserati Boras were built, and just 289 fitted with the larger 4.7 litre engine, from a total production run of 571, and it was largely regarded as Maserati’s first supercar. Unveiled in 1971, the Maserati Bora, named after the Adriatic wind, was undoubtedly one of the stars of the Geneva Motor Show.  It was also Maserati’s first mid-engined car with the glorious 90-degree 4.7-litre development of the Ghibli’s V8 engine mounted behind the front seats, producing a healthy 310bhp @ 6000rpm. The Bora transmitted its power to the road through a five-speed ZF transaxle gearbox, pushing this stunning coupe to a top speed of 170mph.

Equal to its impressive specification was its design, penned by the great Giorgetto Giugiaro, a man at the top of his game in 1971, and later named ‘Designer of the Century’ in 1999, the Bora sought to bring sophistication to the mid-engined platform. Standing just 1138mm high, the Bora stole the show with its stylish, brushed stainless-steel roof and windscreen pillars, and a huge rear window, enveloping a stunning interior with sinuous bucket seats, and sumptuously leather clad dash, door trim, centre console and rear bulkhead.  But it was also conceived as a grand tourer, with a decent-sized luggage compartment in the front and a carpeted engine cover in the rear.  Maserati also fitted an adjustable pedal box, hydraulically operated brakes and pop-up headlamps, which were just some of the myriad innovations that showed the influence that new owner Citroen was to bring to bear.

Customers included Karim Aga Khan and Italian movie producer Carlo Ponti, husband of Sophia Loren, and the Bora quickly proved itself to be a compelling alternative to a Ferrari, Porsche, or Lamborghini, and there is not a finer example on the market today.