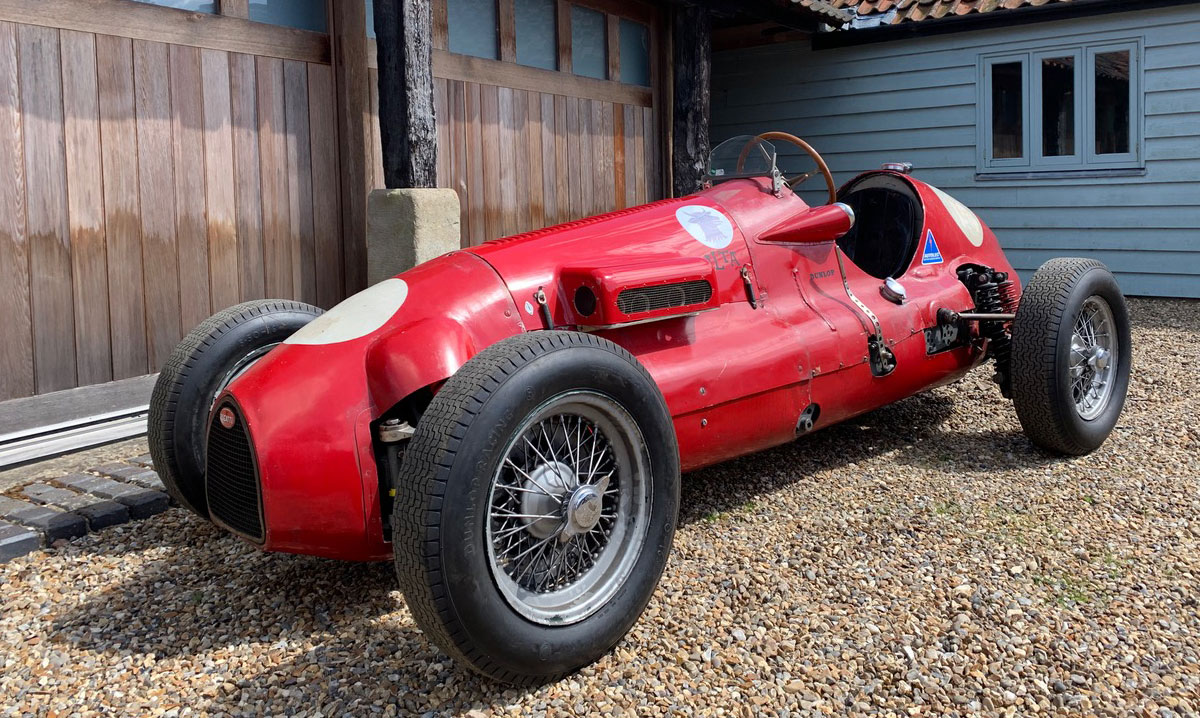 One of just 40 Bugatti Type 51A built between 1931-35, the origins of this car date back to Count Stansilaw Czaykowski, the Polish Grand Prix racing driver, who raced a Type 51A at Le Mans in 1933, as one of a number of Bugattis he owned. In 1946 the well-known Bugatti specialist Jack Lemon Burton sold an Ex-Count Stansilaw Czaykowski Type 51A to an English privateer who took the tired and retired racer, and turned it into a Special.

The first incarnation of this Bugatti Special was the work of Michael Chorlton, a talented privateer and film director, who set about reducing the weight by first narrowing the car’s Bugatti chassis laterally locating the front suspension with a single leaf spring adding an independent double wish-bone arrangement with coil springs. Meanwhile, the Bugatti rear axle was fitted with four dampened Girling coil springs, to which Rudge hubs and wire wheels were then fitted.

The original Bugatti gearbox was retained, as was the steering box, although even this was reconfigured and mounted upside down. To improve the aerodynamics the two-seater Bugatti body was then replaced with an aluminium monoposto GP style.

In this guise this single-seat Bugatti Special went on to compete at a number of International events including the 1948 International British Empire Trophy in the Isle of Man; the 1948 Zandvoort Grand Prix; and Goodwood’s very first Members Meeting in April 1950 where it shared the grid alongside Stirling Moss’ HWM 50-Alta and Prince Bira’s Maserati 4CLT/48, finishing 5th.

This Special’s second incarnation came in 1950 when the car became a Bugatti Alta in the hands of a Mr Rigg, who further developed it by fitting a supercharged Alta engine, DB2 back axle and a pre-selector gearbox, pressing it into action and successfully competing in VSCC events throughout the 1960s.

Inevitably at some point, the increasingly valuable Bugatti chassis was removed from the car (as was the case with the Bugatti Ford Special we sold some years ago), and in its place, a replica T51 chassis was fitted. This frame was the work of the highly respected go-to Bugatti chassis specialist Gino Hoskins. Today the car runs a highly sought-after normally aspirated Emeryson 2.5 litre Alta engine.

Under its most recent ownership, the car has been further developed and raced-prepped by Pace Products for the 2017 Goodwood Members Meeting and VSCC Loton Park in September 2021, achieving a first in class.

Boasting two of the great names in motor racing as part of this car’s provenance, this Bugatti Alta is the very epitome of a ‘Special’ culture where no marque was regarded as too precious or valuable to be beyond the innovations and tweaks of early privateers like Chorlton and Rigg.

Today it represents a very affordable and unique racing car with a colourful history, and wonderful patina which is eligible for some of the best historic events.