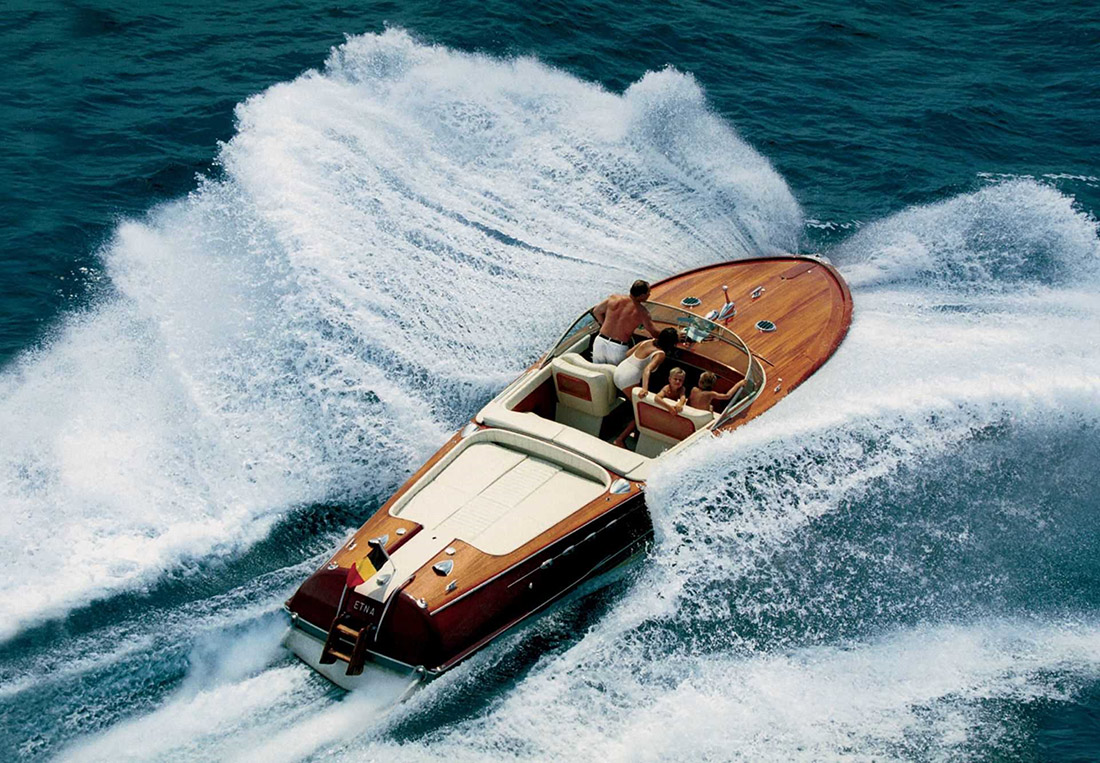 Mike Owen charts the irrepressible rise of Riva, the coolest craft on the Riviera

We’ve all dreamt this one: driving the Riviera’s twisting corniche, roof down and ripping through the tight turns as spectacular scenery unfolds, to the soundtrack of a Ferrari V12 rasping and wining, into an airstream fragrant with the sweet scent of the steep hillside’s mimosa, thyme and pine. Cut to the foot of a cliff and the sparkling azure waters of the Mediterranean, and a straight-lining, beautifully varnished, high speed Riva Aquarama launch is carving the most perfect white wake across the bay, aiming for waiting harbour-side sundowners. It doesn’t matter if it’s Monaco, Cannes or St Tropez. It’s a fantasy pairing of two classic design icons; a duo which has never been out of fashion; the definition of la dolce vita and the very epitome of cool.

Fantasy for some, but for others it is a simple fact: Fine cars and boats just go together. Ask RM, one of the leading auction houses, and perhaps the highest profile sales-facilitator in both sectors and recording parallels in pricing too. Case in point: legendary racing driver Bob Grossman’s Ferrari 275 GTS (chassis 07331) sold for a nicely numbered $990,000, and Riva’s last Aquarama (hull 774), $975,000.

Half a million might be a more regular figure for the 8.3-metre long, twin 350hp V8 engine Aquarama, but it’s as much about provenance as what you see. The must-have launch of the Riviera smart set, the Aquarama is forever associated with stars like Bardot, Belmondo, Delon, Eckland, Loren, Onassis, and Taylor. But it went further. This bewitching marine beauty was dubbed the ‘boat of kings’ enjoyed by so many heads of state – like Hussein of Jordan, Hussan of Morocco, the emirs of Kuwait and Qatar, sheiks too many to count, and, of course, royal princes. Importantly among these, Prince Rainier III of Monaco.

Famously married to film star Grace Kelly he also had, beyond the palace precincts, an open long-running affair with the beautiful, then upstart, Riva. He adored all he saw in these sweetly curvaceous, wondrously handcrafted fast launches. And he was significant in putting the brand centre stage in what became the greatest marketing double-act ever in yachting.

Rainier and Carlo Riva, the fourth-generation head of the eponymous family brand, simply connected. Seeming alchemist as well as engineer, innovator, and radical marketer, Carlo upended the yard’s previous history of commercial boats and later small racing foils, to declare his stake in the elite world of leisure speed-boats. His motto through time was simple and clear, “You’ve got to believe in your ability to ignore what is impossible.” It was 1950, and the US had this market wrapped, with Chris-Craft in charge. First, Carlo took on their agency for Italy,  then thought he could build better. He’d been designing fast boats since a kid with, by age 19, designs in build in the family’s Sarnico yard on Lake Iseo, northern Italy. Carlo knew where he was headed. He flew to the States, and on future-promises extracted an early six of 50 ordered Chris-Craft engines, returning with only three dollars in his pocket. Three years on, Carlo ordered 1,000 as business boomed on the back of his pioneering new marine-ply technologies, enabling exquisite hull shaping – like the famed, wildly flared bow and tear-drop hull – simultaneously gaining massive strength to weight advantages. With this and his insistence on perfection in finish and detailing, he fed the cravings of A-list pleasure seekers. It became as though: no Riva, no smart set.

Reinforcing Riva’s singularity, Carlo turned to Chrysler for his engines, and making a reported 100-plus nips and tucks, these customised units, largely V8s, were at last Riva badged. Their sound, too, was their own, a soft-throated rumble that stole the soul – a velvet sensation extending deep into the Riva, complimenting a smooth, sea friendly ride few could rival. Fifteen models filled the range between 1950 and ’92. All simply beautiful. In lustrous mahoganies and Honduras cedar, with 20 coats of hand-sanded varnish, extraordinary chromed metalwork, all from simplest screw to bold stemhead fitting, and tear-drop cleats, designed and engineered in-house to standards never seen afloat, and then the unimagined upholstery in his trademark, turquoise and white, hand-stitched leathers.

An alchemy and magic, that was uniquely his, ran through every element of build and finish.  His style so entranced Prince Rainier that when Carlo sought a Riviera base, solely to service his owners’ needs, incredibly he was permitted to blast a massive 100-metre long storage, maintenance and docking facility out of the rock directly beneath this Prince of Monaco’s own Grimaldi palace. While Rainier’s windows rattled, Chris-Craft and others quaked. Riva had really arrived. Dominating the west corner of Monaco’s rich harbour, the brand and its exotic creations had become, well, rather well placed.

And so it remains. The jettied ranks of gleaming Rivas fronting the same landmark terracotta offices are still there, and still impress. Although the Seventies saw the brand and its future yacht design and construction sold out of the family (apparently on a whim) and into yachting conglomerate Ferretti,  the treasured, quintessential location, is still home to Riva specialist Monaco Boat Service, headed by Carlo’s daughter Lia.  Agent for contemporary models, they also broker the remarkable restorations and reconstructions coming out of the original Sarnico yard from RAM, led by another wing of the family, who with full Riva history transform even what can seem little more than a ship wreck back into sensational form and finish. Such is the demand for vintage Rivas that others restorers have entered the fray. From the fairy-tale lakes of Europe to the Great Lakes of the USA, from the shores of the Mediterranean to chilly more northern waters, there’s a wide-ranging restoration trail. In England, Peter Freebody & Co frequently find themselves guardian and broker of projects, led by second generation Richard Freebody, as do Riva Revival in Wales, under Nick Thompson, collector and renovator. The Netherlands have Riva-World and Classic Boats Amsterdam. It’s natural that restorers and brokers merge and in the USA Antique Boat America runs a big book as, too, does Lycam in Italy.

Almost completing our story, Lycam is owned and operated by Gabriele Morisini, a classic Ferrari fanatic, whose extensive vintage Riva listings currently include perhaps one boasting the most glamorous associations. The clue to that provenance lies simply in the boat’s name ‘Sophia’, pinned across the sensual barrel-back stern, in Riva’s own unique metal font, naturally. The host boat is, of course, Sophia Loren’s 1963 Aquarama (hull 3), with twin Chris-Craft V8s and one heck of a history. Price is undeclared, unlike Sophia’s love of Riva.

Riva may be the choice ‘boat of kings’ but there’s no need to pay a king’s ransom for membership of this elite club. In 42 years, 4,000 Riva mahogany speedsters were built, across a 15-model range, and current market prices, while heading toward the million, begin as low £40,000, even £25,000 if you are lucky.

A good starting point would be a visit to the Riva d’Epoca Collection on the shores of Riva’s home Lake Iseo. Collected and curated by Romano Bellini, who bought his first Riva just aged 16, pristine examples of every model are exhibited. At last year’s Masterpiece, the art world’s equivalent of Salon Privé, there was indeed a masterpiece on show,  but it wasn’t a Picasso or  Rembrandt. Sitting rather incongruously between dealers offering multimillion-pound artworks, was a Riva Tritone. Cleverly described as “A Riva with Royal Appeal” it went onto say “The same year that this Tritone was completed, 1958, Prince Rainier and Princess Grace of Monaco took delivery of their beloved Tritone ‘Via’, hull #62”.  One of only 258 examples built, and fully restored over four years (2012-16), it may have been the only boat at an art fair, but there was nothing remotely out of place about the price, at £325,000. If anything it looked a bargain.

The model names roll on, all true collectables, just variously priced, the ‘easy’ middle majority floating between £125,000 and £250,000.

Then there are those will real stand-out features. Take a recently restored 1968 Aquarama (hull 278) originally commissioned by Ferruccio Lamborghini, on condition the engines were his own. So, in went a pair of adapted 350hp 4.0 litre V12 Lamborghini units. An Aquarama with the heart of a Lamborghini, it became the fastest Aquarama ever, pushing 55mph.

Values, however set, rarely fall but then this is not all about investment, for most it’s a matter of pure appreciation.

Mike Owen  is an international yachting and lifestyle writer and former editor of super yacht bible Boat International. One of his most memorable moments was being behind the wheel of a Riva Ariston.

Copyright 2022 - The Old Racing Car Company
Back To Top